It was back to my favorite cemetery to take more photos. I took some great photos from the year before, so I was looking for something different. As I walked around the cemetery, I noticed this tree with red and orange leaves. It was the only tree in the cemetery with this color - very spooky. The photo was taken and processed as an HDR picture to bring out the vibrant colors. It truly looks like a tree on fire.

Established in 1855 on the immediate outskirts of Leesburg, Union Cemetery was created as a public cemetery open to people of all faiths. It predated three other "Union" cemeteries in Loudoun County established at Hillsboro, Waterford and Lovettsville. The cemetery contains the 1908 Union Chapel and several notable monuments, including a Confederate War Memorial at the north end of the site, and an imperfectly cut 30-foot- high granite column, allegedly designed for a D.C. public building, but rejected and brought to the cemetery in the 1890s.

This photo was taken on Halloween weekend with the Nikon D90 - an extraordinary camera.

Photo via www.flickr.com
No comments:


Years ago, during our lazy summer months, it seemed a certain ritual was performed every Saturday – the trip to our swimming hole. Our town, being an old mining town, was located in some rough country. We couldn’t just drive or even ride our bikes to our favorite spot – one had to walk. Even walking was a chore. The path was barely visible, littered with undergrowth, leaves, and fallen branches. The trees also present a problem, dodging higher branches only to encounter some fallen limb or dead tree stump. But we endured and after an hour trek, our reward lay before us.

Over the years, someone had attached a rope to one of mighty branches that extended out horizontally over the river and looked like the massive arm of a giant. There everybody stood, seeing who would the first one in. Why, one might ask, did we stand around after a long and painstaking walk and not take the plunge. A whirlpool! The tree, with time and the ever-changing course of the river, stood in the water and caused a natural whirlpool.


This photo was taken with a Canon EOS 10S with Fuji Velvia 100 positive film. I had an opportunity to live in Italy and Rome was one of my favorite destinations. The Coliseum and the Forums were some of my favorite subjects. The following article tells of the colorful history of the Coliseum.

When most people think of ancient Rome, they think of the incredible Coliseum; the grand oval amphitheater that was a central part of Roman culture. The setting where gladiators fought and crowds cheered. While this is true, there's a lot more to the Coliseum than merely an arena. It took two emperors about eight years to design and build it. Vespasian started it, but died before it was completed. His son and successor, Titus, finished the job and opened it with a celebratory 100 days of games. It was called the Flavian Amphitheater in honor of the Flavian ancestry of Vespasian and Titus.

It wasn't until somewhere in the middle ages that it was given the name Coliseum, due to a 'colossal' statue of Nero that stood near it. The amphitheater was designed to hold 50,000 people. It covers about six acres and is more than 150 feet hight. When Vespasian became emperor, right after a very trying time when Rome when through four emperors in one year, he decided to make an impression on the people, to quell the uneasiness. Nero had built a massive palace and artificial lake near the Forum, and the people were not happy with his extravagance, especially since most of them were starving or dying from disease.

Simple Rules to Live By 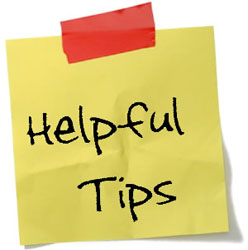 Under-Promise, Over-Deliver. Never commit to something you cannot deliver. When negotiating a deadline, be 100% confident that you can exceed it. Deliver before your deadline. Then do more than expected. Include value-added touches, such as an executive summary, talking points, implementation plan or slick packaging.

Meet Every Deadline. Late work is career suicide. Remember this — there are 24 hours in a day and seven days a week, and someone else may be able to help you. If there is no possible way you can meet a deadline, renegotiate it as soon as you know it might be late.

Ask For Help. It is a sign of strength, not weakness. Whatever your current task, someone else already has done a similar project and has learned from the inevitable mistakes and wrong approaches. Find these people so they can help you avoid pitfalls and improve your project. Look outside your unit and service — the answer may reside in a neighbor who works for another office, unit or agency, or in the private sector.

Search For Good Opportunities. Throughout your career, you will be assigned lots of special projects, collateral duties and odd jobs. Volunteer for collateral assignments where you can excel or from which you can grow and learn. Let your supervisors know you are interested in special projects that will help you grow.


Every year, the owner cuts an elaborate maze into the corn field. Temple Hall Farm Regional Park preserves the agricultural, cultural and natural resources of the 286-acre farm and provides an educational and recreational resource that explores farming in Loudoun County for the people of Northern Virginia.

This beautiful working farm in Loudoun County provides an opportunity for children and adults to learn about farm animals and to enjoy the sights and sounds of the farm. Visitors can bring a picnic lunch or snack to eat at the picnic tables, bring cake and presents and celebrate a birthday, take a walk on the babbling brook trail over the creek and through the woods. On weekends you can join the farm interpreter for a free tour of the farm.

Educational programs are available to introduce school and youth to Northern Virginia's farming heritage. Designed as an outdoor classroom, the park educates children about the diverse aspects of farm life, animals and crops.

Every year Temple Hall Farm creates a giant cornfield MAiZE. Thousands of visitors "get lost" in the MAiZE as they try to find their way out. After going through the MAiZE visitors can go to the pick your own pumpkin patch, go shoot the corn cannon, ride on the cow train, bounce on the Billy Goat Bounce, or take a hayride.

This photo was taken with the Nikon D90 - an extraordinary camera.

Driving in the Nation's Capital


So you've decided to take a trip to your nation's capital. Well here's a few things you should know that will hopefully help you prepare for your trip.

The DC road grid was laid out by a Frenchman, which explains why locals hate the French and also explains much about US Foreign Policy. Within DC proper, the roads are laid out in a grid, with other streets crossing the grid at weird angles, usually through a traffic circle. No one in DC knows how to drive in a traffic circle, and people from the suburbs are worse. Many streets are one way, and making a left turn can require traveling three or four blocks out of your way. Right turns are worse. Right turn on red is allowed, except at intersections that are posted otherwise. Most intersections are posted otherwise.

Also, within DC we take security seriously! Primarily by shutting down major roads and intersections for no discernible reason.

If your road map of Montgomery County is more than a few weeks old, throw it out and buy a new one, it's obsolete. If in Loudoun or Fairfax County in Virginia, and your map is one day old, it's already obsolete.

There is no such thing as a dangerous high-speed chase in DC, it's just another chase, usually on the BW Parkway.