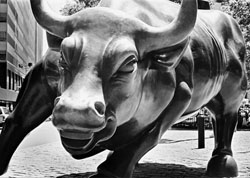 What do dead cats, gunslingers and zombies have to do with investing? In the often cockeyed parlance of Wall Street, each has a very specific meaning. Here are a few examples of Wall Street's more colorful terms:
Air Pocket Stock
A stock whose price plunges like a 747 hitting an air pocket - usually caused by shareholders rushing to sell on unexpected bad news.
Chastity Bonds
A bond that may be redeemed at par value after a takeover.
Dead Cat Bounce
When stock prices rebound right after a precipitous market decline. Even a dead cat will bounce if it falls far enough, right?
Dwarfs
Pools of income-oriented, mortgage-backed securities - issued with maturity of 15 years by the Federal National Mortgage Association (better known as Fannie Mae).
Elephants
Large institutions like mutual funds, pensions, banks and insurance companies whose voluminous trades can dramatically impact stock or bond prices.
Elves
The 10 technical analysts who forecast stock price movements on PBS's "Wall Street Week" television program.
Fall Out of Bed
When a stock's price drops on negative news about the company.

Fallen Angels
Bonds whose ratings have declined from investment grade to junk (i.e., downgraded from BBB or higher to BB or lower by Standard & Poor's, Duff & Phelps or Fitch, or from Baa or higher to Ba or lower by Moody's). Investment grade bonds are generally considered to be suitable investments for conservative investors. Junk bonds are speculative.
Falling Knife
A stock whose price is in the midst of a nose-dive. Investors are often told, "Don't try to catch a falling knife."
Footsie
Nickname for the Financial Times-Stock Exchange 100 (FT-SE 100), an index of blue chip stocks traded on the London Stock Exchange.
Go-Go Fund
A mutual fund that invests in highly speculative stocks in an effort to provide big gains to shareholders.
Goldilocks Economy
The economy of the middle and late '90s - not too hot, not too cold, but just right.
Goodbye Kiss
A payoff by a corporation to a company or individual attempting a hostile takeover. In accepting the payoff, the corporate raider vows to purchase no more shares for a certain number of years. The goodbye kiss is sometimes known as greenmail.
Gunslinger
A gung-ho portfolio manager who invests in big-risk stocks looking for high returns.
Killer Bees
Investment bankers who help companies thwart hostile takeovers (see shark repellent, below).
Misery Index
A combined index of unemployment and inflation rates. Coined during the Carter administration when high unemployment and high inflation made the lives of many Americans miserable.
Nifty Fifty
The 50 stocks most favored at any given time by banks, mutual funds, pensions, endowments and other large institutional investors.
Q-tip Trust
A qualified terminable interest property trust designed to transfer assets from one spouse to another. Upon the death of the creator of the trust (the grantor), all income from the assets held in trust go to the grantor's spouse for the rest of his or her life. When the spouse dies, assets are distributed to individuals specified by the grantor in the original trust document.
Red Herring
A preliminary prospectus released prior to a new securities issue.
Santa Claus Rally
A jump in stock prices often occurring the week after Christmas - also known as the year-end rally. Some consider the Santa Claus rally to be linked to the January Effect.
Shark Repellent
A tactic designed to ward off hostile takeovers. Common forms of shark repellent include severance packages that make it expensive to oust existing management or lay off workers, a special issue of stock or bonds that may be redeemed at a premium in the event of a takeover or even a merger with a more attractive company.
Sleeping Beauty
A company ripe for takeover (it has large cash reserves, undervalued real estate, etc.), which hasn't been approached by a suitor.
Stock Jockey
A stockbroker who attempts to produce short-term gains within client accounts by constantly buying and selling stocks.
Ted Spread
Short for "Treasuries over Eurodollars" - the margin separating the interest rate on U.S. Treasury bills with that of Eurodollars. Futures traders follow the Ted spread closely, speculating that the margin will expand or tighten.
Tenbagger
A stock whose value increases tenfold.
Three Steps and a Stumble Rule
A rule of thumb that says prices will often fall following a third consecutive rise in the discount rate.
Tombstone
Stark, type-only advertisements that announce new securities issues.
Triple Witching Day
The third Friday in the quarter-ending months of March, June, September and December when options, index options and futures contracts expire.
Vulture Fund
A limited partnership that seeks out distressed assets during depressed markets, speculating that prices will bounce back and produce strong gains.
Wallpaper
Suggested use for stocks of failed companies, bonds from defaulted issuers and other securities that have become worthless.
War Babies
Securities issued by defense contractors.
Zombies
Insolvent or bankrupt companies that continue day-to-day operations. Also known as the "living dead."

These comments are not screened before publication. Constructive feedback about the above story is welcome, but personal attacks are not. Please do not post comments that are commercial in nature or that violate any copyright(s). Comments that we regard as obscene, defamatory, or intended to incite violence will be removed. If you find a comment offensive, you may flag it. When posting a comment, you agree to our terms.