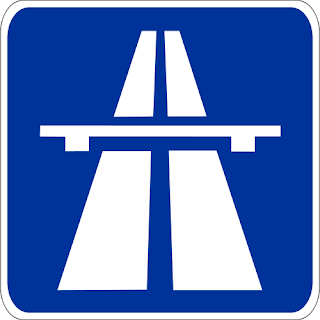 When traffic is not crawling at a snail's pace, it's generally racing along like a NASCAR speedway. Unfortunately, there is no slow lane, and the occasional slow driver is impeding the rest of us Mario Andretti's on the road. Autobahn is the German word for a major high-speed road restricted to motor vehicles capable of driving at least 60 km/h (37 mph) and having full control of access, similar to a motorway or freeway in English-speaking countries.

In my last article, I talked about one of the contributing factors for the traffic in Washington, DC - Closing the Gap. Let's talk about another phenomenon known to exist around the beltway and I-95 – the Personal Autobahn Effect.

While it is common courtesy (and the law in some states) to yield to overtaking traffic, some aggressive drivers abuse this and treat the roads as their own personal autobahn.

When traffic is not crawling at a snail's pace, it's generally racing along like a NASCAR speedway. Unfortunately, there is no slow lane, and the occasional slow driver is impeding the rest of us Mario Andretti's on the road. Read more…In this area, it is not uncommon to drive faster than the posted speed limit around the beltway and on I-95. And if you're on the left-most lane, you routinely see speeds exceeding the legal limit by 20-30 mph.

Each individual driver must decide what they are comfortable with, but some aggressive drivers take it further by insisting all drivers get out of their way to allow them to speed. Even if you're doing 70 mph in the left lane and have visible traffic in front of you, these drivers will flash their lights, honk their horns, and give other visible signs to insist that you get out of their way.

What makes them so special? If I'm doing 70 mph, keeping up with traffic, and dealing with the regular assortment of road hazards, what's makes the guy behind me believe it's his privilege – no, his right – to run up on my tail and try to intimidate me?

Like I mentioned earlier, yes, it's the law in some states to give way to overtaking traffic. But most of these laws also mention a second condition that must exist – a condition that most drivers ignore, or simply don't know – the overtaken vehicle must be driving abreast of another vehicle.

What's does that mean? It means that if I'm driving in the left lane and AT THE SAME SPEED as the car abreast of me, then I must give way to an overtaking car in the left lane.

However, what if there is no car next to me? Or, what if I'm safely passing in the left lane, to begin with? If an overtaking driver proceeds to harass you at this point, they are clearly in the wrong and only demonstrating the aggressive nature of the driving in DC.

So, the next time you proceed to pass in the left lane, take a second to see what the traffic conditions are like ahead of you. Remember, we are all in this race together.

These comments are not screened before publication. Constructive feedback about the above story is welcome, but personal attacks are not. Please do not post comments that are commercial in nature or that violate any copyright(s). Comments that we regard as obscene, defamatory, or intended to incite violence will be removed. If you find a comment offensive, you may flag it. When posting a comment, you agree to our terms.